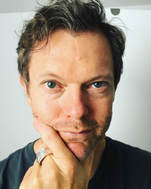 Dale has created in Blake some of the finest music I have ever heard...so emotionally strong and evocative that it has become another character in the show "  --  George Adams

​Dale Cornelius has been described as highly inventive, a truly unique artist, and having an ability to evoke an immediate emotional connection with an audience through music. Cornelius’ musical diversity and distinct scores have made him one of Australia’s premiere film and television composers.

“I bought my first vinyl record when I was 8yrs old. It was Greig’s ‘Peer Gynt Suite’ and I’ve been fascinated by music that can tell a story ever since”

Dale has received nominations and awards for his work in television and feature film here and overseas. Amongst which; winning the AACTA for Best Sound/Music in a Documentary in 2013 for Dr. Sarmast’s Music School and Best Television Theme Award at the Australian Screen Music Awards 2013 for The Doctor Blake Mysteries.